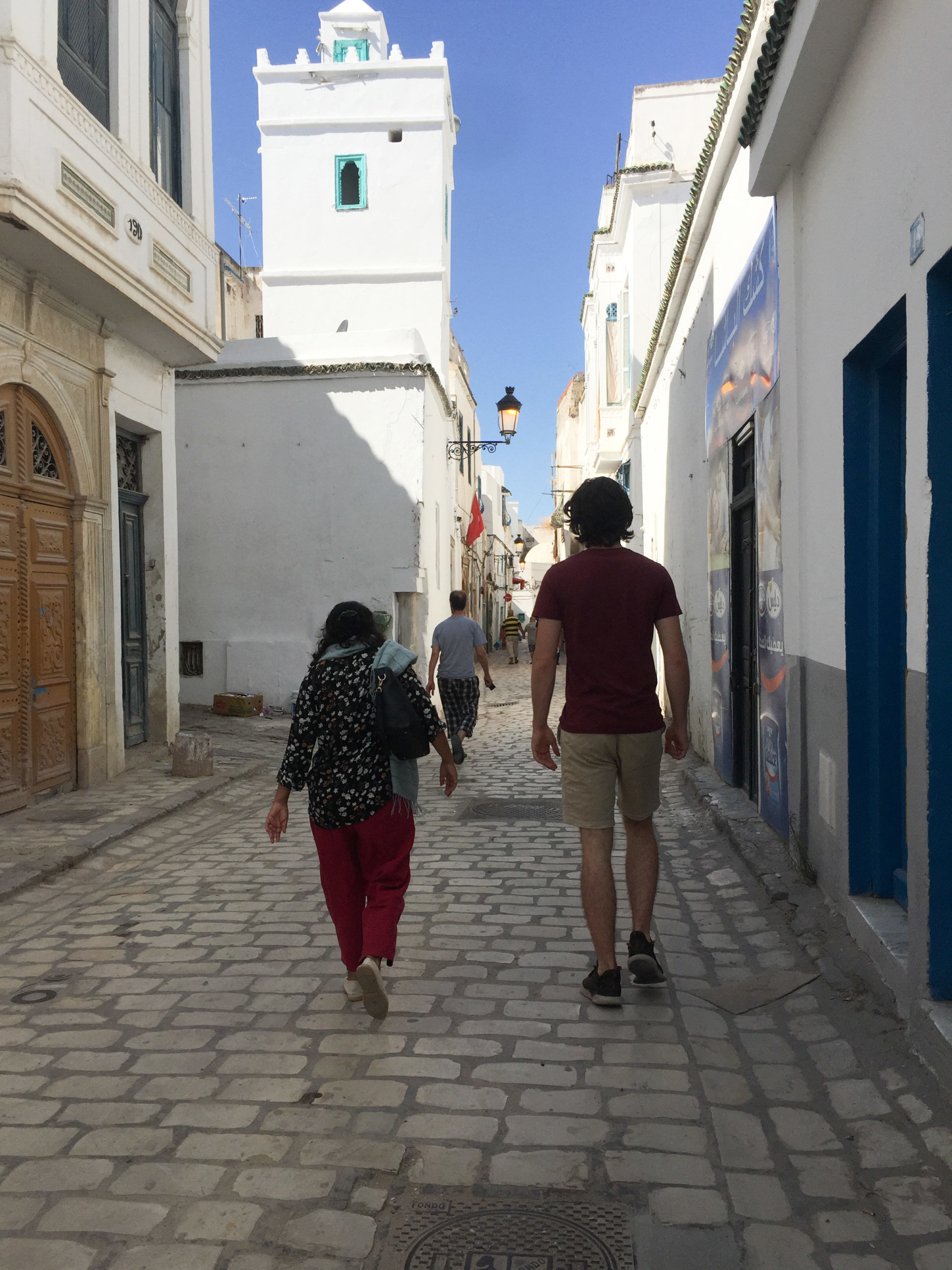 05 Oct First Impressions of the Medina

Posted at 14:12h in Non classifié(e) by darbengacem
92 Likes
Share

On Thursday I walked around the Medina with Mohamed, one of the tour guides at Dar Ben Gacem. We left the hotel at 10:30 and got back in time for lunch at Dar Slah (more on them at another time). Quick recommendation for long walks: don’t wear sandals. They chafe like sandpaper and enhance your tourist-factor tenfold. Another tip: walk slowly and enjoy the scenery. I consider myself a professional speed-walker, but I’ve discovered the joy of a more relaxed amble – a ‘tetsahwek’.
We visited the five districts of the Medina: Turkish, Andalusian, Christian, Jewish and Bazaar. Each has its own flavour which I could only partially appreciate on this short tour. I’ve made a mental note to examine and appreciate each district individually. I noticed that people probably spend more money on their doors than on other things; we passed numerous ornate doors coloured bright yellow or sea blue with fascinating inlaid patterns. Though each door is bold and unique, they form a beautiful, congruous landscape that becomes a background for one’s life. But a few times a week, perhaps on the way to pick up groceries, does one stop to appreciate just how magnificent the doors really are.
I’ll avoid describing the tour in much detail because I wouldn’t want to spoil it for the reader. Needless to say, I now have a catalogue of helpful tips, wacky anecdotes and historical crimes. But there is one thing I should mention, because it still strikes me when I go outside: cats, they’re everywhere! I was expecting rats and pigeons populating the streets, but was delightfully surprised when Mr Mistoffelees greeted me outside Dar Ben Gacem. Though many locals are desensitised to their cuteness, I remain enamoured with these street cats.
Something else I learnt about Medina life: everyone knows everyone; we must have come across at least 20 people whom Mohamed knew well. About thirty minutes in, we met up with Juan (a nickname I’m fairly sure) who strolled with us for the rest of the tour. Through Juan and Mohamed, I learnt my first few Tunisian words: essentials such as “attini”, “aishq” and, my personal favourite, “habibi”.
The day after my Medina tour with Mohamed, I was offered another tour by your local friendly old man. He recognised me as a foreigner (again, the sandals) and told me that he had “expert knowledge of all the best places in the Medina”. My teenage awkwardness and broken Arabic conspired against me and, before I knew it, I was following him. I toured around the Medina with this guy for about an hour and, I’ll admit, he knew some interesting places. But ultimately, I was being played – I grinned at the thought, “Ooh, my first tourist hustle, how exciting!”. At the end of it, I went back to Dar Ben Gacem and got him ten Dinars, because he’ll probably spend it on something more useful than two boxes of Grain d’Or. The moral of the story? If you want an easy tourist hustle, look for the pasty teenager with Jesus-hair and cargo shorts.
In seriousness, never have I felt anxious nor threatened in Tunis – the same can’t be said about London – and perhaps I didn’t mind being scammed by that old man because I knew he was harmless. Before I came to Tunisia, I knew that the Medina would be beautiful and rich in culture. And yet, what has struck me most is the graciousness and friendliness of the Tunisians who live there.